The Humanitarian Corridors based on MoU signed with public authorities in charge and Community of Sant’Egidio and other organizations that involve civil society in different European countries: Italy, France, Belgium, Andorra.

The first Humanitarian Corridors have been implemented from Lebanon to Italy in accordance with a Memorandum of Understanding called “Opening of Humanitarian Corridors”, signed on December 15th 2015 by the Ministry of Foreign Affairs and International Cooperation – Directorate General for Italians abroad and Migration Policies, Ministry of the Interior – Department for Civil Liberties and Immigration, the Community of Sant’Egidio, the Federation of Evangelical Churches in Italy (FCEI) and the Tavola Valdese (Waldensians Church).

The first MoU allowed the safe and legal entry in Italy of 1.011 Syrians refugees from Lebanon.
Between 2016 and 2017, 1.011 people have been welcomed in 80 different cities spread out in 18 Italian regions thanks to the involvement of volunteer organisations and local/grassroot associations who foster the integration of beneficiaries, according to the “widespread reception” model.

A third “Opening of Humanitarian Corridors” Protocol – signed on January 12th 2017 by the Italian Episcopal Conference (through Italian Caritas and Migrantes Foundation) and the Community of Sant’Egidio – is currently in progress and assure the legal and safe entry in Italy for 500 Eritrean, South-Sudane and Somali refugees from Ethiopia.

Furthermore, two different Humanitarian Corridors Protocols have been signed for refugees from Lebanon to France and Belgium, for a total of 650 visas for humanitarian reasons.

The “Human Corridor” project based on the following Protocols:

The Community of Sant’Egidio
The Episcopal Conference of Italy (CEI)

To avoid deaths of people at sea

To struggle against trafficking on human beings

To strengthen security in Europe

Sustainable welcoming and reception of refugees

Who are the beneficiaries 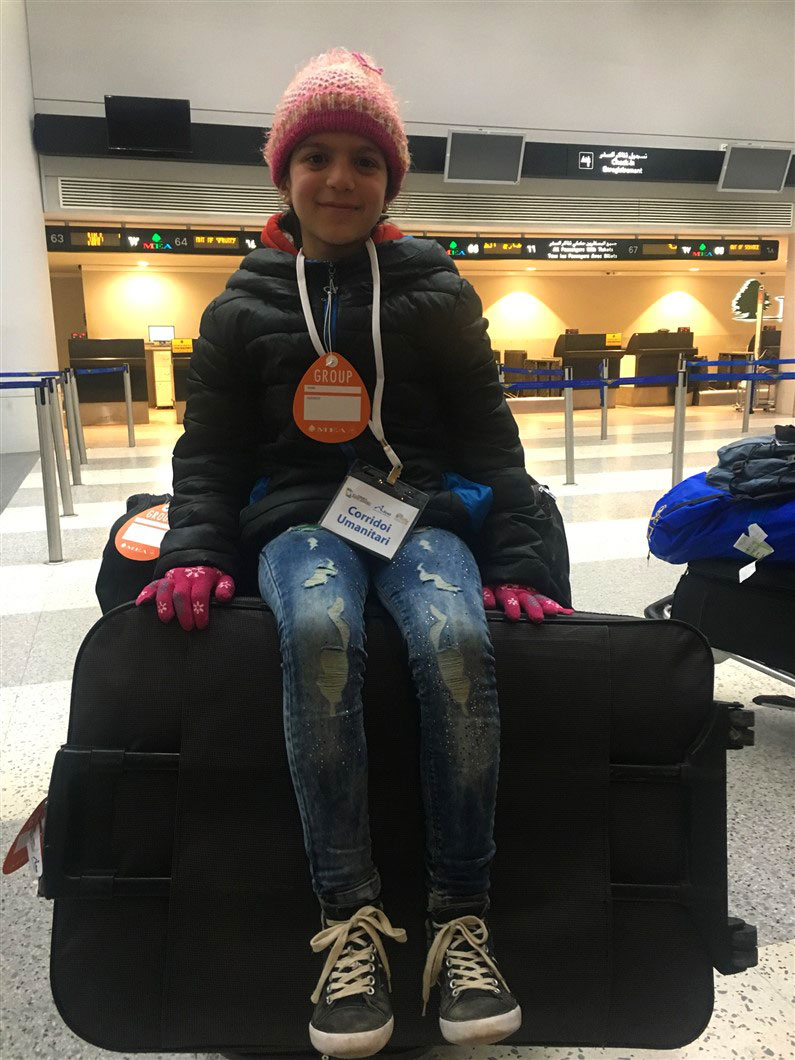 IDENTIFICATION AND SELECTION OF THE BENEFICIARIES IN THE TRANSIT COUNTRIES (Lebanon, Ethiopia)

IDENTIFICATION OF THE HOSTING ACCOMMODATIONS IN THE DESTINATION COUNTRIES (Italy, France)

At the same time, coordinators activate operators in destination countries (Italy and France) to find possible suitable geographical locations where refugees can be hosted and where accommodations fitting with their specific needs are available. The reception and integration system involves volunteer organisations and local/grassroot associations spread out in the national territory (Italy and France); these networks are activated also thanks to the awareness raising activities with the host communities carried out by the promoter associations.

Successively, through the web platform, the promoters carry out the matching between the selected beneficiaries and the available accommodations according to the specific needs of each beneficiary.

PREPARATION OF THE BENEFICIARIES

The contact persons of the promoter organizations explain to the potential beneficiaries: motivations and modalities of the Humanitarian Corridors; current legislation on the right of asylum that will be applied to them. Moreover, training courses are organized before departure to Europe on linguistic, cultural, socioeconomic aspect of European societies.

Completed the bureaucratic procedures, the competent authorities of countries of destination release the humanitarian visa to the selected beneficiaries.
The operators belonging to the promoter associations elaborate a list with data and information on beneficiaries to be sent to Unhcr, competent authorities in countries of departure and the airlines companies to select the flight/s. Medical checks are planned for all the beneficiaries and are carried out not earlier than 4 days before departure.

SOCIAL INCLUSION AND INTEGRATION PATHWAYS IN THE EU COUNTRIES OF DESTINATION

Refugees are hosted in apartments, share apartments, small reception centers or private rooms according to their specific needs.
In order to foster the integration pathway in the civil society and the achievement of self-sufficiency, refugees benefit of the following services:

HOW LONG THE INTEGRATION PATHWAYS IS

On average, a family unit needs a year and a half to achieve full autonomy or, at least, a significant semi-autonomy. This period of time may be, obviously, even longer: for example, it takes two years on average in cases of people with specific vulnerabilities. However, since the most part of the families supported by the project are composed by vulnerable persons 1.5 years to get autonomy represents a very good result and is an important evidence of the success of the Humanitarian Corridors model.

Slightly lower periods of time are recorded, on average, for individuals.

The humanitarian corridors are based on European legislation: the Schengen Agreement and the Lisbon Treaty already provide “subsidiary and temporary protection” for those fleeing wars or natural disasters, and demonstrate how, using the legislative instruments already available of the Member States of the European Union, regular admissions can be guaranteed for vulnerable persons in need for international protection.

The corridors, therefore, constitute a valid response, on the one hand to the needs of refugees who escape critical situations crossing the Mediterranean risking their lives and, secondly, to the needs of the destination countries that require control, security, legal access and appropriate reception.

This good practice can be the premise of two regulatory developments:

The programme is funded by the promoter organizations and by the solidarity networks scattered throughout the national territory. The humanitarian corridors do not include costs to be paid by the State for the reception and the integration pathways: the costs are entirely borne by promoter associations and civil society.